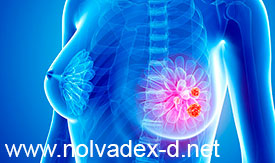 Presently, breast cancer certainly belongs to the most hazardous and major world’s threats to women’s health. It is the most frequent form of cancer in the female population, the second prevailing cause of cancer death in women and one of the most frequently encountered causes of death in women worldwide. Contrary to widespread belief that this malignant process can be easily diagnosed at every stage, recent scientific studies have found that not only the self-examination methods are not as effective as was hoped, but are rather harmful to women’s health.

As for the incidence rate of this disease, it has been continually increasing since the late 1970s in both developed countries and regions with developing economies albeit for different reasons. With allowance for this, the necessity to develop and maintain a sensible view of this threat is undoubted.

Tumorigenesis starts with the formation of abnormal potentially malignant cells either in highly specialized cells responsible for the production of milk in glands or ducts. In most cases, the early stages of tumorigenesis in breasts are completely asymptomatic. Usually, the period during which the tumor grows large enough so that it can be detected manually takes at least five years.

Among the risk factors, the most hazardous ones are the following:

The early phases of tumor development (1st and 2nd) are symptomless and cause no sense of discomfort/pain. The cancer lesion is usually detected before the appearance of the immediate symptoms during mammography or through manual detection of a lump. In most situations, it is diagnosed only at the 3rd and 4th stages, when the tumor is already visible and has the appearance of an ulcer or a large thick lump. Pain syndrome is usually associated with germination of the growth in the thoracic wall.

Among the indirect indicators of the disease, the most alarming are the following: 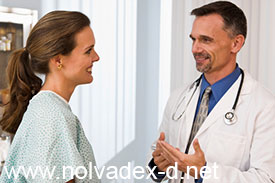 Identification of at least one of the observed symptoms requires urgent consultation with a physician, especially after the age of fifty years when the risk of developing a malignant neoplasm grows significantly.

The most efficient methods of therapeutic intervention include surgical treatment, radiation therapy, and drug treatment.

Currently, surgical treatment remains the leading method whereas other curing modes are usually applicable in the course of adjunctive therapy or in case of a localized malignant process. In most scenarios, patients undergo partial or total mastectomy during which the surgical removal of the neoformation along with the surrounding tissues is performed.

Such treatment strategies as chemotherapy and radiotherapy are currently used mostly as a part of adjunctive therapy before or after a surgical intervention in order to minimize the chances of disease recurrence or to alleviate especially severe symptoms in patients suffering from the latest stages of metastatic cancer.

Targeted therapy is applied only to patients with tumors expressing a specific HER2 gene.